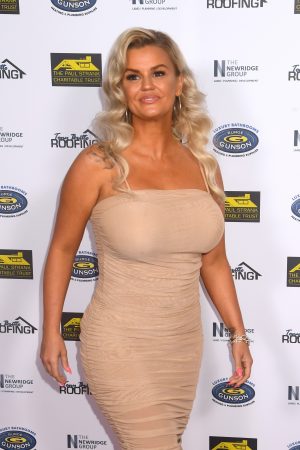 Kerry Katona has joked that her famous This Morning interview is no longer the ‘car crash of the century’ following Prince Andrew’s appearance on BBC Newsnight.

His Royal Highness sat down with journalist Emily Maitlis in order to speak about his relationship with Jeffrey Epstein and deny claims he had sex with young women during his friendship with the convicted sex offender.

Having left viewers cringing by insisting he couldn’t have had sex with his alleged victim Virginia Roberts on a certain date because he was visiting a Pizza Express restaurant, Kerry took to social media to poke fun at the Duke of York.

The former Atomic Kitten star’s iconic interview with Phillip Schofield and Fearne Britton is known for showing her slurring her words and hitting back at Phil and Fearne for suggesting she had an alcohol problem.

Taking to Instagram, Kerry shared a snapshot from the well known moment beside a still from Prince Andrew’s recent chat.

Captioning the upload, she quipped, ‘Turns out my interview is no longer car crash of the Century no more #princeandrewcheers for that!!! But I’m sure I seen him in ICELAND Woking buying a prawn ring! It was very rememberable as I thought how unusual it was to see Prince Andrew with ONE POUND!!

at least u have a sense of humour. Well played.

Meanwhile, another commended Kerry for being able to poke fun at one of her lowest moments, writing, ‘what a legend! Best comment I’ve seen so far on this whole Prince Andrew thing

The post Kerry Katona thanks Prince Andrew for taking ‘worst interview of the century’ title from her appeared first on Woman Magazine.