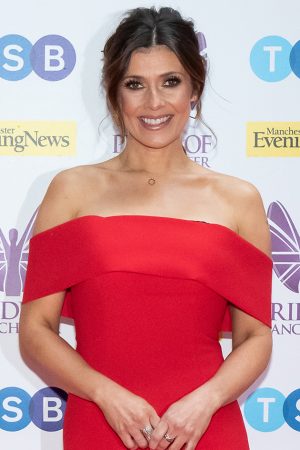 Kym Marsh has revealed that she was rushed to hospital.

The Coronation Street actress has revealed that she was rushed to hospital after being injured by her little Chihuahua dog Rico.

Recalling the “nightmare” encounter in her column with OK! Magazine, the actress revealed that her dog had accidentally pawed her eye earlier this week, resulting her having to be rushed to the hospital.

“As many of you know, I’ve got a little chihuahua puppy named Rico,” wrote Kym in her magazine column. “He’s very playful and likes to stroke your face with his paws. But he accidentally pawed my eye.”

Kym then explained that, while she didn’t initially feel any pain from the scratch, the following morning she woke up to find that the left side of her eye had turned completely red.

After consulting with an optometrist who prescribed antibiotics for the “small lump” on her eye, the mum-of-three ended up having to head to the hospital after the injury didn’t get any better.

“After being sat in the waiting room for hours and hours, I was the last patient to be seen!” revealed Kym.

“The staff were fantastic,” she continued. “They diagnosed me with a conjunctival cyst and gave me steroid drops, but warned me the cyst may never go away, which is scary.”

“You take your eyes for granted so it’s really nerve-wracking when something like this happens,” added Kym. “I’ve just got my fingers crossed that the drops will work.”

Earlier this year, the singer opened up another health condition that she suffers from.

Speaking to OK! Magazine, the star said, “I’ve had pain in my pelvis for a while now. I recently went for an MRI scan and I’ve been told I have a bone spur on the tip of my coccyx.

“It’s basically an overgrowth of bone, which is pushing into muscles and tendons and causing me discomfort,” she explained, adding that she would have a procedure done to fix it.

The post Kym Marsh reveals she was rushed to hospital with ‘scary’ condition that ‘may never go away’ appeared first on Woman Magazine.