Pennsylvania residents will eventually get the chance to play casino games and bet on sporting events over the internet, but the launch date for those mobile offerings is still a few months away.

The Pennsylvania Gaming Control Board believes online gambling will be up and running in the state by sometime this summer. (Image: Karen Bleier/AFP/Getty)

That word came during O’Toole’s testimony before the Pennsylvania House Appropriations Committee on Wednesday.

“We are getting close,” O’Toole told the committee. “If not right before the end of this fiscal year, definitely at the beginning of the next.”

The fiscal year begins in July, so O’Toole was essentially suggesting a late spring or early summer start time for online gambling sites.

According to O’Toole, most of that time will be needed to test and certify the software systems that will be used to operate the online casinos and sportsbooks.

But some of the wait may also be due to the new interpretation of the Wire Act issued by the Department of Justice earlier this year. After that opinion was released, the PGCB gave notice to casinos that they would have to fully comply with the Wire Act in order to be licensed to offer online gambling in the state.

“What we wanted to accomplish in that letter was to make sure that the casinos thoroughly read that reinterpretation and looked very closely at their plan for implementing interactive gaming in Pennsylvania,” O’Toole told the committee.

A similar timeline was suggested during a Thursday licensing hearing for Parx Casino in front of the PGCB. During that meeting, Greenwood Racing CEO Anthony Ricci told the board that Parx expected to be ready to launch its online gambling operations at some point during the second quarter.

Ricci agreed with the PGCB’s belief that the new Wire Act opinion would cause some delays for Pennsylvania operators, but minimized the impact.

“I don’t think it necessarily affects what we are going to do,” Ricci told the board. “We had contemplated putting servers in New Jersey, but that’s not an option now.”

According to Ricci, the biggest issue could come down to payment processing. A strict reading of the current Wire act interpretation would suggest that even deposits and withdrawals would need to take place within state lines to comply with the law. Still, there are solutions that would be guaranteed to work in a pinch, including the possibility for players to handle the banking at brick-and-mortar casinos in Pennsylvania.

During that same hearing, Ricci talked about how successful the launch of sports betting had been for Parx casino.

“[Sports betting] skews a little younger, it does,” Ricci said. “People who haven’t come to the casino previously, so we’re pleased about that. It’s attracting a different audience. That’s why we want to proceed with the construction of a permanent sportsbook as an attraction to draw people in, particularly during football season.” 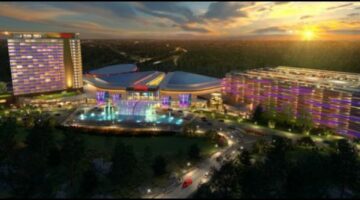